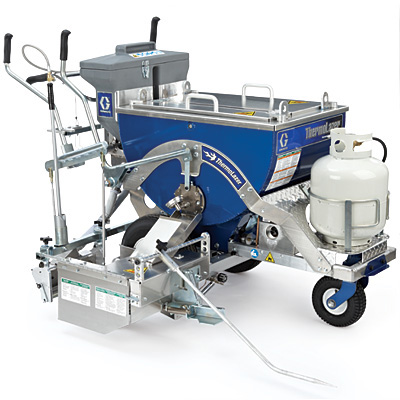 Graco has been in the striping machine business for decades and manufactures the Line Lazer which is one of the most popular line stripers in the business.  Just a few years ago, Graco created the Thermolazer or Thermolaser Hand liner thermoplastic striper.  It is designed to favor the original line lazer with its front swivel wheel and large back tires.  While Graco is a great company and make a great paint striper it is important to keep in mind that they have only been in the thermoplastic striping business for a few years.  With that being said, lets discuss the pros and the cons of their newest machine and venture.

The standard Thermolazer has a 300 pound hopper for melting the thermoplastic and a 4 – 4.5 hour melt time.  Because of the long melt time you would need to use a premelter to feed hot thermoplastic to the striper.  An alternative to this is to purchase the Thermolazer Promelt system.  This is the same basic striper but with a much more robust melting system. It features a 4 chamber 100,000 btu melting system.  It can melt 300 lbs of thermoplastic in under an hour.  This option can save you the $10,000 plus that you would have to spend on a premelt system.  Coming up with this option was smart on Graco’s part.  Now with just this machine you can tackle all the small jobs.  All of which are very profitable.   In summary, if you have a premelter you would only need the standard model.  If you don’t you would need the Promelt system.

Note: as a general rule the coverage rate for thermoplastic is 3 feet of 4″ striping per pound of thermoplastic.  Or one square foot per pound.

The front wheel design of both the standard and promelt hand liners makes the machine a little more cumbersome than the rear wheel designs, however, with some practice this is not as much of a problem.  Most people are used to a rear swivel wheel.

The Graco Thermolazer comes with a SmartDie II System.  It can be used without heat or in cooler weather with heat.
The unique “floating” die design allows the die to float with a constantly changing surface thus allowing the
best possible line.  Changing a die requires no tools and is fast a simple.  There are no springs which is nice and the dies come with a built in mil adjustment.  All very innovative.  Available die sizes are 3″ – 12″.

Both models can be driven using the Graco Line Driver and both can be fitted with a glass bead dispenser.  The price on the Graco machines is high compared with other models but you do get a very capable machine.  The promelt is especially versatile.

The machines are heavy weights and weigh in at about 300 pounds for the stanard and 350 for the promelt.  If you stripe hills make sure to invest in the line driver system. To give you a comparison the Thermomark II by Advanced Striping Equipment weighs 290 pounds with a premelter.

The standard Graco Thermolazer will cost you between $11,000 and $15,000 depending on where you buy it.  The Promelt model runs about $3,000 more.  Keep in mind that you can pay for the machine with just the first few jobs.

This site is sponsored by The Reflective Tape Store.

Third Party Advertising Google, one of our third-party advertisers, may add a cookie to determine targeted advertisements based on your preferences and your visit to our site and other sites on the internet. You can choose to opt out of Googles use of cookies by visiting the Google ad and content network privacy policy.